Luddites are so 200 years ago. We look at five tech trends that are shaking up offices in the twenty-first century. 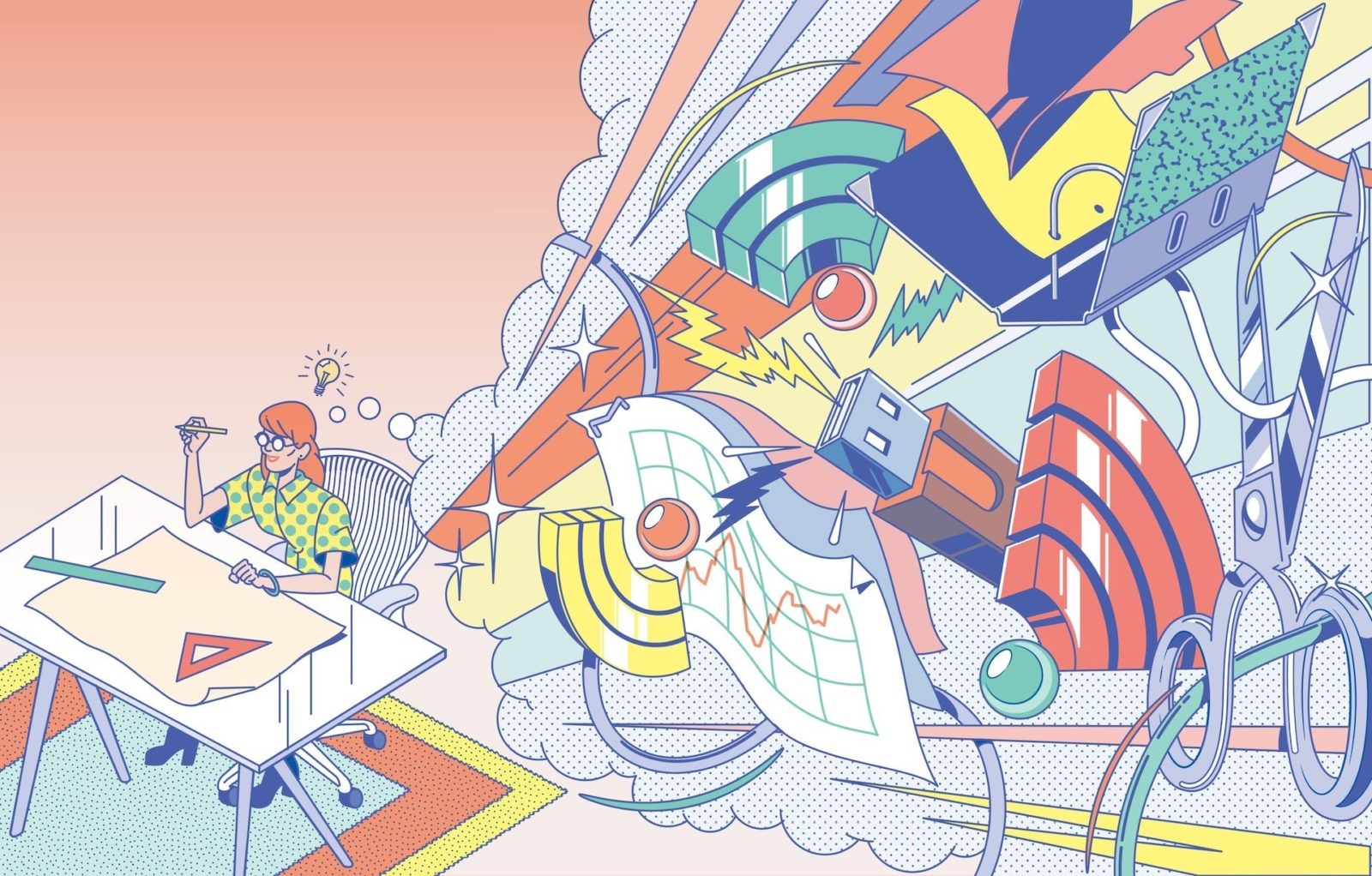 “Any sufficiently advanced technology is indistinguishable from magic.”

“But Lo! Men have become the tools of their tools.”

Click on a link embedded in a calendar invitation, and a series of windows opens to reveal a cadre of global colleagues ready to tackle the work ahead, in stunning 1080p resolution with 24-bit audio. Technology—it’s amazing! Spend half an hour entering and reentering a 10-digit code into the room’s videoconferencing equipment before giving up and cobbling together a telephone call. Technology—what a farce!

Love it or hate it, technology defines—and continually redefines—the processes, expectations, and behaviors related to work. So, with that in mind, here’s what we see on the technological road ahead, from some near-term basics to visions of an audacious future.

A lot of jobs used to require that people come to a place of work to use bulky desktop computers loaded with expensive software; make calls on bulky desktop phones; and make printouts or copies using expensive, bulky equipment. And send faxes, lots of faxes. If your last trip to a coffee shop didn’t make it abundantly clear, those days are over. With the occasional charge and connection to a wireless network, our technology can now help us accomplish all kinds of work in all kinds of places (including in the expensive and bulky building your company occupies). So give people anywhere-and-everywhere access to the basics: a comfortable place to sit, a flat surface to work on, a place to plug in (with USB outlets, too), and instant connectivity.

The next time you’re at a dinner party with someone in IT and the conversation fades to awkward silence, why not ask where he or she stands on BYOD? For the layperson, that’s “bring your own device”—a term that came into vogue at Intel, in 2009, as an increasing number of employees began connecting their personal phones, tablets, and PCs to the corporate network. To folks in IT, it’s either a great way to empower people to get their work done by allowing them to self-select convenient and up-to-date tools or a giant security risk and a compatibility headache. Wherever your fellow guest stands on the issues, there’s no denying that the variety of choices and ease of use we’ve come to expect as technology consumers are generating an “app mindset” for all of our technology experiences. That means if it takes more than a minute to download and install, requires more instructions than can be intuited from a couple of uses, or doesn’t live up to its initial promise, people will toss it out and move on.

It says something that one of the most celebrated inventors in human history recognized that “great discoveries and improvements invariably involve the cooperation of many minds.” Alexander Graham Bell likely never imagined a world in which his discoveries would lead to something (surprisingly useful) called Slack, but electronic communication has evolved to enable new means of co-creation, group cognition, and productivity. It used to be that those “many minds” all had to be in the same place at the same time—and technology largely served individual productivity and creation. With work increasingly distributed among diverse global teams, technology today is helping to enable “asynchronous collaboration”—where individual contributions to a larger-scale project may occur independently of schedule or location. There is a dizzying array of software (and cloud-based) solutions that enable this work, but the latest tools don’t always jive with IT policy. Make it your policy to enable the right tools for the work at hand.

If mention of “the Internet of things” causes you to roll your eyes and ponder the universe’s need for a refrigerator that tells you the milk’s sour, you’re not alone. But consider this: experts suggest that the number of connected devices will reach 50 billion by 2020. While today those smart devices may be thermostats and toothbrushes, tomorrow they’ll range from raincoats to urban sanitation systems—and the implications of everything talking to everything else represent nothing short of a fundamental shift in human experience. Undoubtedly, the impact on work and workplace will be significant. Individual and group settings will automatically adjust to predetermined preferences (from simple things like lighting levels and surface heights to more complex things like perceived comfort and privacy). Calendars will automatically shift to enable the optimal gathering of participants, given the location and purpose of the meeting. Entire settings could be swapped out overnight based on the work at hand. Ideally, a smart workplace will enable a more seamless experience for individuals, while the data being collected from all those interactions will help organizations make wiser strategic decisions about how to provision for their people. The clock is ticking, so it’s time to wise up on smart.

With technologies like Google Cardboard and Oculus Rift, virtual reality has gone, in 2016, from being virtual to, well, real. Although workplace applications for VR and its less-Matrix-like cousin augmented reality, will likely be more specialized and limited for some time to come, we like to imagine a time when we need not fly halfway around the world for that important meeting but rather host it in virtual space. Some of the more audacious possibilities for virtual meetings might include the ability to: tightly monitor and control, or even eliminate, body language and facial cues; translate conversations and presentations into multiple languages on the fly; look more than one person in the eye simultaneously while making that critical point, or turn a sour meeting around by switching over to puppy and kitten avatars. The possibilities are virtually limitless.

Starting a project or have a question?

A member of our Catalyst team is here to help