Tech firm Ibotta saw a move to a larger office as an opportunity to better facilitate collaboration and improve employee attraction and retention. 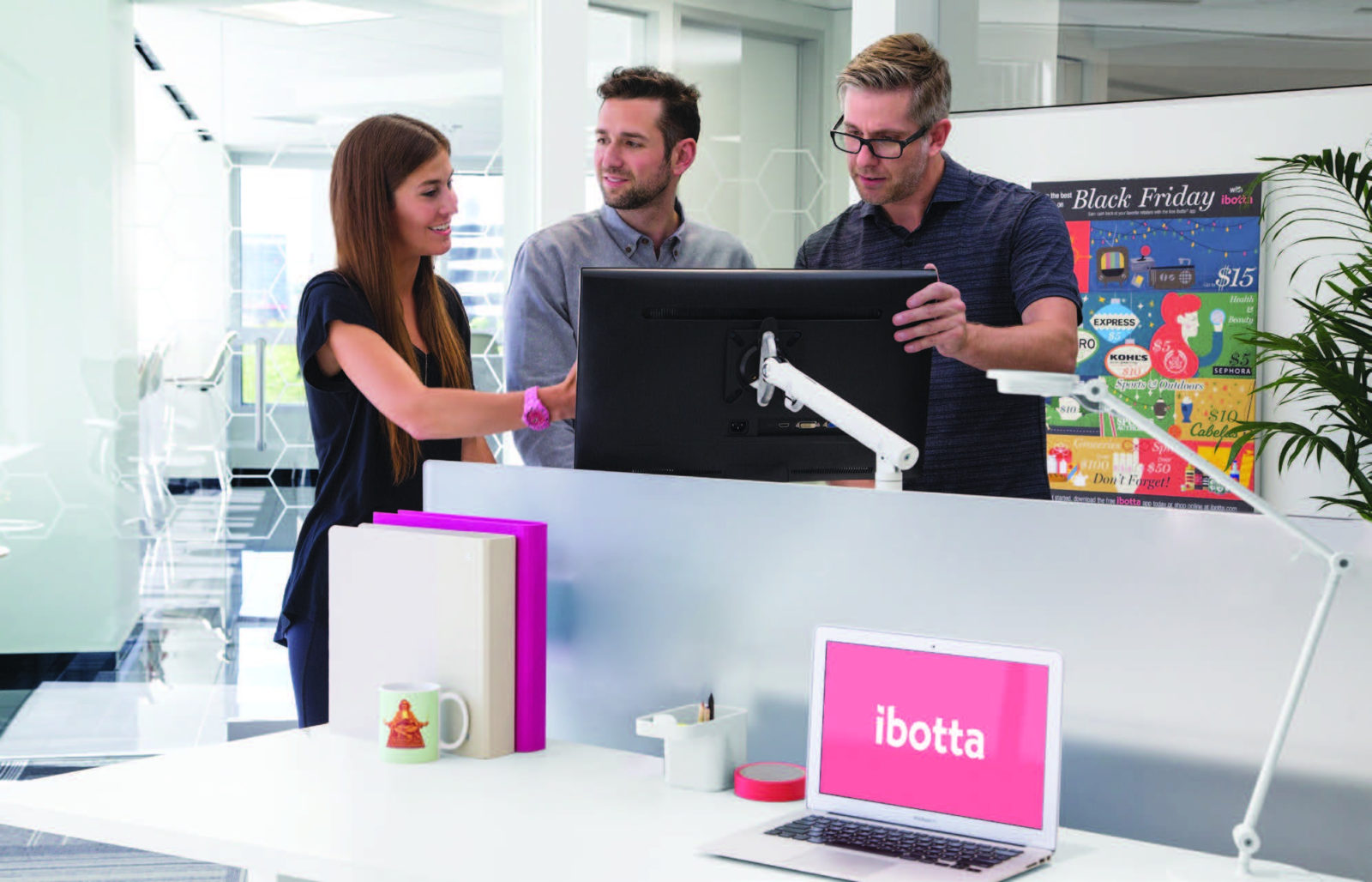 In today’s competitive technology sector—where programmers can land six-figure starting salaries straight out of college, then float seamlessly from lucrative gig to even more lucrative gig—companies have embraced the belief that their physical office space can be a differentiator. Tech titans such as Apple and Facebook have enlisted “starchitects” like Lord Norman Foster or Frank Gehry, respectively, to help create inspired and inspiring workplaces for employees. Other technology companies both inside Silicon Valley and beyond are also recognizing the power of place to help attract and retain top talent.

One such firm is Ibotta (pronounced “I bought a”). Launched in 2012, Ibotta boasts growth that would make any app worth its IP envious. The company’s signature product—a mobile shopping app that allows users to earn cash rebates on everyday purchases—passed the $100 million mark in cash-back rewards in 2016. The payouts reflect a growing base of loyal users, which in turn has meant increased revenue and lots of new hires.

Between 2015 and 2016, the Ibotta team more than doubled in size to nearly 300 employees. The company desperately needed more square footage, but Ibotta’s executives saw the hunt for new digs as an opportunity.

Ibotta’s former workplace was laid out in a long, narrow orientation, with teams arranged in pods along the full length of the space. This made it far too common for employees who needed to work across teams to find themselves on opposite ends of the office. When the company was smaller, shouting to a co-worker across the space could pass for good cross-company communication. But as Ibotta grew, the inability for colleagues to come together easily and work collaboratively without disturbing others had become a problem.

“I think in our old space, not only was collaboration really difficult, but it was also hard to focus, because of the distractions stemming from the inability of others to find space to collaborate,” says Tim Hannan, Chief Marketing Officer for Ibotta. Hannan heads the company’s 20-person marketing department, a team with roles ranging from analysts to designers, all of whom need input from other team members to perform effectively.

In the spring of 2016, Ibotta relocated its headquarters to a 40,000-square-foot space in CenturyLink Tower, downtown Denver’s tallest office building. Like tech giants in Silicon Valley, the company recognized that its workplace could help achieve its business goals.

“We knew that just expanding our footprint, but leaving everything else the same, wouldn’t be all that effective,” says Karsten Voermann, Ibotta’s Chief Financial Officer. “We needed something that was fundamentally different and fundamentally better, in terms of driving the things we care about: communication, collaboration, and ultimately, more creativity.”

Ibotta turned to Herman Miller to help create a more ergonomic space that lowers the barriers to effective collaboration both within and across teams.

“When people think about ergonomics, they typically think physical ergonomics—how do I fit into my environment,” says Herman Miller’s Dan Eaton, a Denver-based ergonomics specialist who consulted with Ibotta. “But there’s a huge social factor as well. Ergonomics basically means improving or optimizing a process, so social ergonomics means: How can we design places that really maximize the social connection inside the building?”

Eaton worked closely with Ibotta executives, their design partners, and the local Herman Miller dealer to outfit the new space in a way that supports the social nature of working at Ibotta—not only in dedicated collaboration spaces, such as conference rooms, but also throughout the floorplate.

Meeting spaces of various sizes and configurations provide ample opportunity for more formal group interactions. The office landscape is also dotted with Cove Settings anchored by Swoop Lounge Furniture, where two or three colleagues can step away from their workstations and sit down for a comfortable chat. The workstations themselves feature Herman Miller’s Renew Link sit-to-stand benching system and articulating Flo Monitor Arms. Both products are designed to facilitate casual, spontaneous collaboration right at the workstation—where, according to Herman Miller research1, 70 percent of collaboration happens. Renew Link’s angled work surfaces improve sightlines to avoid the distraction of inadvertent eye contact with colleagues across the bench, a seemingly innocent distraction, but one that can disrupt the flow of work and result in lost productivity while both employees get back into the flow of the task at hand. The addition of repositionable Flo Monitor Arms to the high-density Renew Link installation makes it easy for people to share information on their screen with a nearby coworker.

Providing every employee with a sit-to-stand work surface was important to Ibotta executives. “Using a sit-to-stand desk really helps with your mental flexibility throughout the day,” said Alison Meadows, Vice President for Human Resources at Ibotta.

“Now not only do we have the space to accommodate our people,” Hannan says, “but the space itself also has an energy about it, where people are constantly coming up with new ideas, sharing them, exploring them, fleshing them out, and making them better.”

A survey of 100 Ibotta employees who have worked in the old and new locations supports Hannan’s statement. The percentage of employees who feel the design of their office allowed them to collaborate effectively is 33 percentage points higher in the new space.

A Place People Want to Be

In addition to stimulating the exchange of ideas that will help nurture innovation and continued growth, Ibotta's new work environment is also helping the company compete for technology workers in Denver, a city with a growing technology sector. When potential new hires tour the space, they see an engaged workforce of people who enjoy working together in a workplace that helps them make a positive contribution.

“Our culture is highly collaborative, so people are building relationships through their day-to-day interactions,” says Alison Meadows, Ibotta’s Vice President for Human Resources. “Not only is this office helping attract people with the right skills to work with us, but it also is setting them up to make meaningful connections and foster relationships that they’ll value too.”

Building an employment brand is a long game. The effectiveness of a workplace can strengthen a company’s reputation among potential hires over time. According to an Ibotta employee survey, the percentage of employees who cite their workplace as one of the reasons they like coming to the office rose by 29 percentage points in reference to the new office.

“The employees were wholly and uniquely happier with the move than any I've seen in the dozen or so large-scale corporate moves that I've helped manage over my career,” Voermann says. “I think a big part of the reason for that has been the quality of the environment they've been provided—the quality of the furnishings and the design of the office layout. And the ergonomics of the space made the transition absolutely seamless.”

For Herman Miller’s Dan Eaton, helping Ibotta address its need for a more collaborative work environment was itself a collaboration. “Ibotta really understood that what we were creating was the whole experience of a space,” Eaton says.

“I think the Herman Miller ability to not only sell furniture and environmental elements, but also advise us on how they could be best used, was a huge differentiator,” Voermann says. “It felt like we didn’t simply buy furniture. Because we were able to leverage so much expertise from the Herman Miller side, what we ended up with was a collaboration that produced an outcome that was better than we would have anticipated.”

That outcome not only works for the company in its current state, with Settings optimized to support the work Ibotta employees do every day. These Settings were also designed to be flexible enough to support the company's steep growth trajectory. Ibotta has the option to expand into another floor in their building if necessary, so the company can accommodate additional employees without a move to another location. And because of the flexible nature of Ibotta’s furnishings—specifically the Renew Link system, which can be added to or reconfigured with ease—their Herman Miller solution can scale with them as they grow.

Catalyst has you covered, with a range of products to meet your budget and services to cover your every need. Contact us to start igniting smarter work now.